Hand over of Kasambya and Kikandwa sites for construction to M/S Block Technical Services Limited.

The Ministry of Water and Environment ( MWE) under Water and Sanitation Development Facility- Central ( WSDF-C) handed over Kasambya and Kikandwa sites for construction of piped water supply systems to M/S Block Technical Services Limited.
The Branch Manager WSDF-C, Eng.Paul Kato while giving his remarks during the site handover meeting that was held at Kasambya Town council in Mubende district thanked the district officials for having handled land issues well and stated that there were no difficulties for the Contractor who will be working on the Water supply system.

The Chairman LC5 of Mubende district Mr. Magezi also thanked MWE and asked the locals to work with the Contractor and ensure safety of the working tools for their own benefit.
The Kasambya Piped Water supply system is estimated to supply a population of 21,266 in 2020 and 47,138 people by the year 2040.
The system will comprise of:
2 pump houses,2 guard houses,1office block with a water-borne toilet,2 public water- borne toilets and a
Water treatment unit among others.

The Ministry officials together with the Contractor later proceeded to Kikandwa Town council ( T/C) in Kasanda district where they also handed over sites for construction of Kikandwa piped water supply system still to M/S Block Technical services Limited. This system has been designed to serve an initial population of 5,279 people by the year 2020 and 11,706 people by the year 2040 with a maximum day demand of 2,64m3 and 6,29m3 respectively.

During the meeting held at kikandwa T/C the Member of Parliament ( MP)  for Kasanda North Hon. Nsamba Patrick thanked the Ministry at large for the great initiative of extending a piped water supply system to the district.
He explained his concerns as far as the way people have been buying water quite expensively and that a very big problem has now been solved since the piped water supply system was being put in place.

Eng. Paul Kato asked the locals and district officials to work hand in hand with the Contractor so as to easen his work. 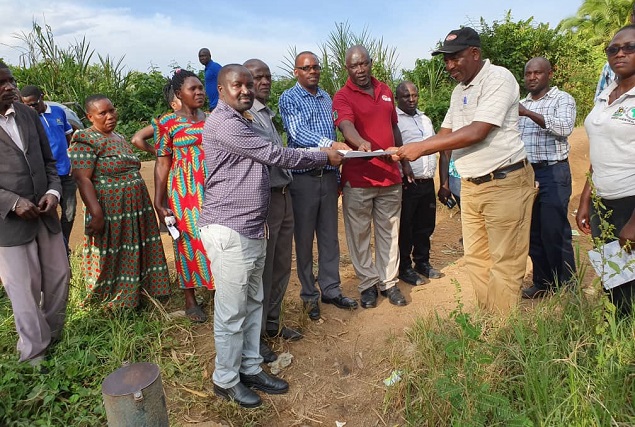 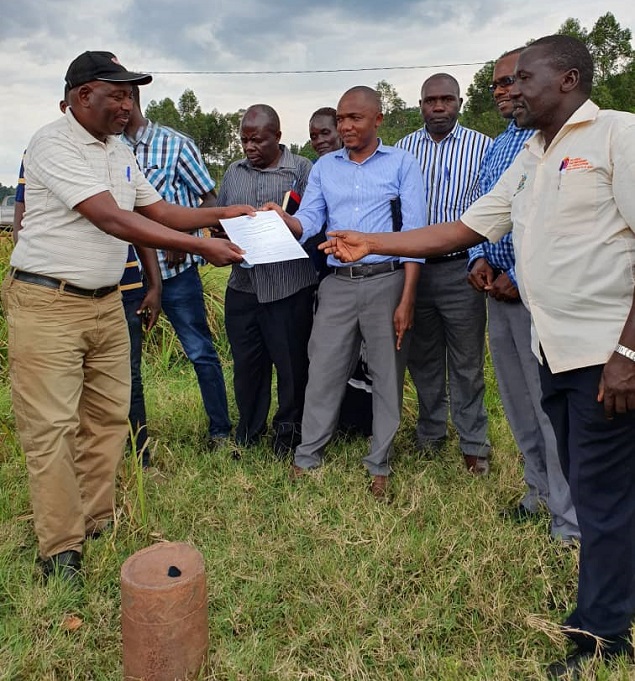 In the process of executing all its operations, the Ministry is committed to zero tolerance to fraud and corruption as guided by the existing legal national frameworks and institutions.

The Ministry of Water and Environment is committed to avoiding, minimizing, and mitigating adverse environmental and social impacts associated with its projects, as well as adopting a gender-sensitive and gender-equitable approach for all its projects.

The Ministry is also committed to ensuring transparency and accessibility of information, in addition to facilitating the resolution of disputes, with respect to environmental and social risks and gender considerations. Read More